The other night I went out with my Dad, brothers, Grandpa, uncles, and male cousins to a BC Lions game. Someone took this photo of my Grandpa Glenn and I, and after seeing it on my camera, he said, “Put it on the internet!” That just cracked me up.

My Grandpa is the king of gadgets. He’s the hardest person to buy gifts for, because when he sees somethings he wants, he just buys it immediately. He’s also the first guy to get anything, whether it’s a satellite dish, digital cable box, handheld GPS, iPod Touch – you name it, he’s got it. Although, the iPod Touch surprised us all. He one day complained that everyone had an iPod and he didn’t, so he went out and bought himself the latest and greatest thing on the market – just days before Christmas. Mind you, he had no idea how to set it up and put music on it, so my brother Jordan had to do it for him. Once he had music and some pictures on there, though, he was showing anyone who would pay attention to him. He’d throw on a Johnny Cash song, and then show you pictures of his fishing trip. It was hilarious.

So, I was going to just put this photo on Facebook and tag my Grandma Dot, who yes, actually is on Facebook, but Jordan suggested putting it on my website so that he’d always know where to find it (at least I hope!). So here’s my Grandpa Glenn, with “Grandpa’s girl,” at the BC Lions game. 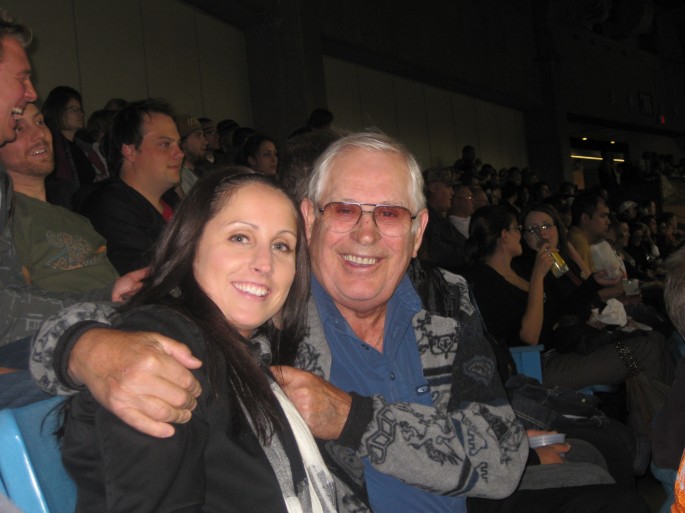 One thought on “My Grandpa”

Half a year has gone by in the blink of an eye. Wyatt is 6 months!
When you finally get that long-awaited date with your hubby, and you run into an old friend! 🥰 #serendipitous
Happy happy birthday Uncle “Gody”(aka @jordanbehan)!