I can’t believe it taken me so long to write about this. Mind you, every single 17 days of the Vancouver 2010 Winter Olympics has been a whirlwind, and life seems comparably dull now that it has come and gone.

It would have been much easier if I did a few posts throughout the Olympics, but alas, I am doing it all in one long post now that I have no plans taking up my evenings. This means that I will leave out a lot of details, but that’s okay.

I am not alone in my depression of the Olympics being over. My Facebook, Twitter, and blogging friends feel the same way.

July 2, 2003. I would have been in Boston, Massachusetts working on a yacht at the time when the IOC announced in Prague, Czech Republic that Vancouver won the bid to host the Vancouver 2010 Winter Olympics. I gloated to my American, British, Czech, Australian, and South African co-workers. Mind you, my South African friends later on won the bid to host the 2010 FIFA World Cup, so we both had reasons to celebrate.

Let’s bring things up a little closer to the present. June 12, 2009. My Mom e-mails myself, my two brothers and my sister-in-law with the subject line “Olympic Torch Bearer!” At the time, I don’t even think I realized what this meant, but I was so unbelievably excited for her. I wrote a blog post about it even!

Okay a little closer. February 3, 2010. Myself, my 2 brothers, my sister-in-law, and my nephew all made the trip from Vancouver, up to our hometown of Powell River for their Torch Relay Community Celebration. We had a few family members who performed in the Ceremony – Cousin Monica & her husband Max, and our Aunt Christine.

What an experience! Of course we have numerous photos (mine are here) and lots of video footage, and my brother Jordan even threw together a great video that still puts a lump in my throat everytime I watch it.

After my Mom carried the torch, it was just a few short days until the Olympics. And what a blur.

On Thursday, February 11th, I got to see the torch for the second time with some good friends, as it was carried into David Lam Park at LiveCity Yaletown. We also saw the first of many fireworks displays. 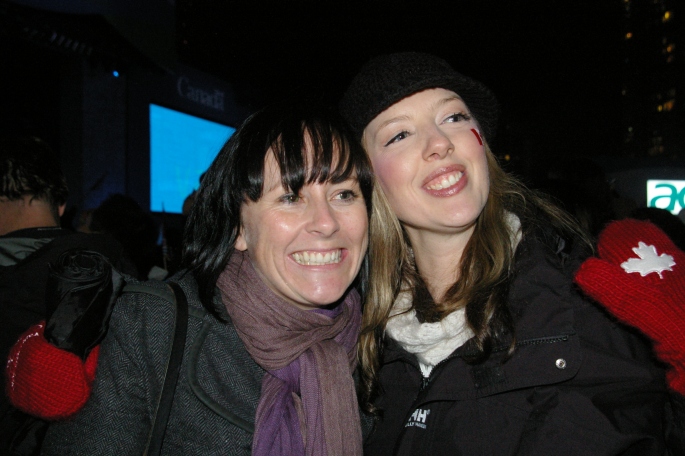 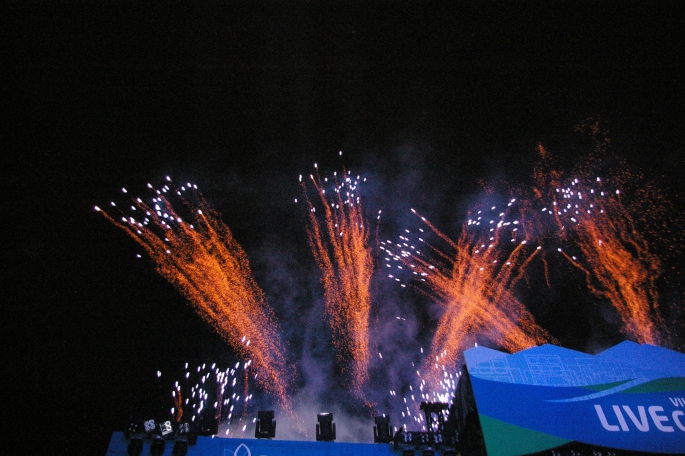 The next morning, February 12th, I walked to work taking photos along the way, and I got to see the torch relay for the third time as it traveled east on Hastings St. A lot of security was was traveling with it, as it had to divert a protest at Cambie and Hastings.

Friday night I stayed in to watch the Opening Ceremonies. I thought they were a great representation of our country from coast to coast and terrific way to welcome the world to our fine city.

The rest of my time was spent hopping around town trying to get into venues, sometimes succeeding, sometimes not. I didn’t always have my camera with me, but did manage to snag a few shots here and there. Here’s a few of Sheralyn and I on February 14th on Granville Island where we visited the Atlantic Canada House. 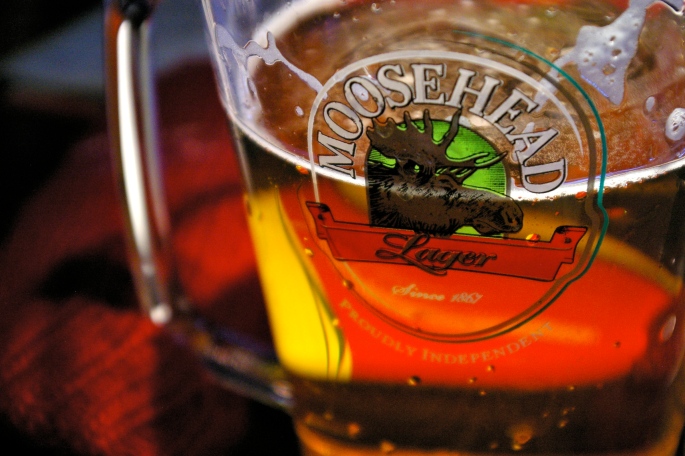 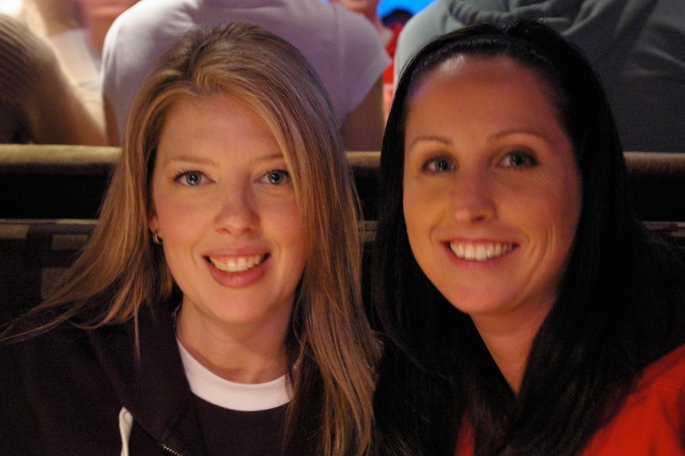 February 16th, I’m pretty sure I went to the Irish House, but there’s no photographic evidence to share. I’m kidding. There is, just not on my camera.

On February 18th, I watched Canada beat Sweden in men’s hockey with my friend Erin and some of her out-of-town friends at Ceili’s. This was not one of them. 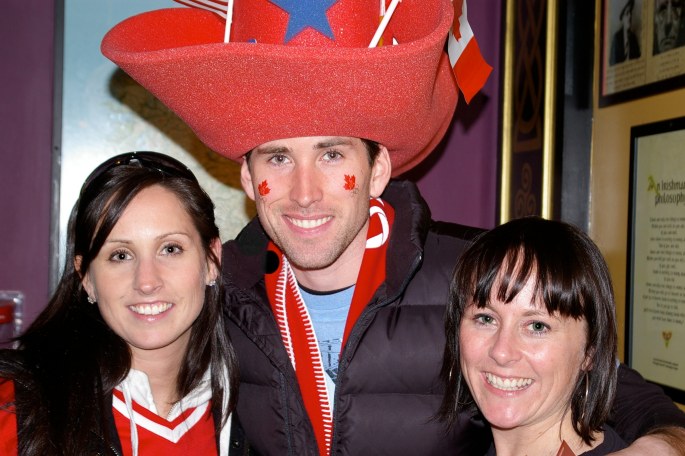 I was lucky enough to see two medal ceremonies. Unfortunately though, both ceremonies were ones when Canadians were not getting medals! Of all the luck! The first one I saw on February 19th, was the night Theory of a Deadman performed. Not a big fan of them, and our seats were waaaay up in the nosebleeds. We did see Aussie Torah Bright get her gold medal for snowboarding, though – sorry Rob! And we met up with more friends afterward at Dix Brew Pub where we watched John Montgomery win gold in Skeleton! 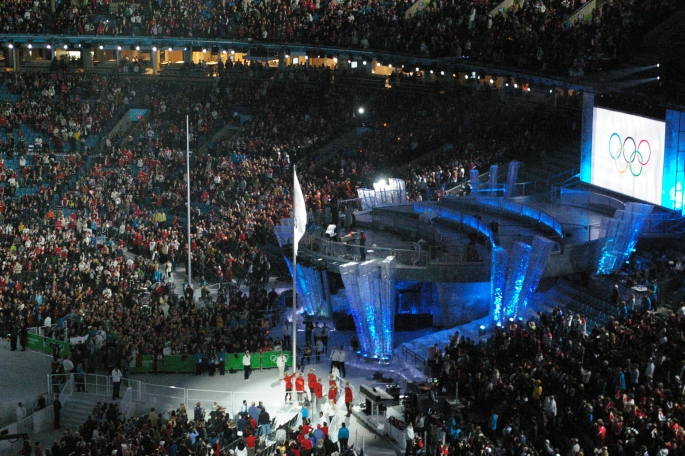 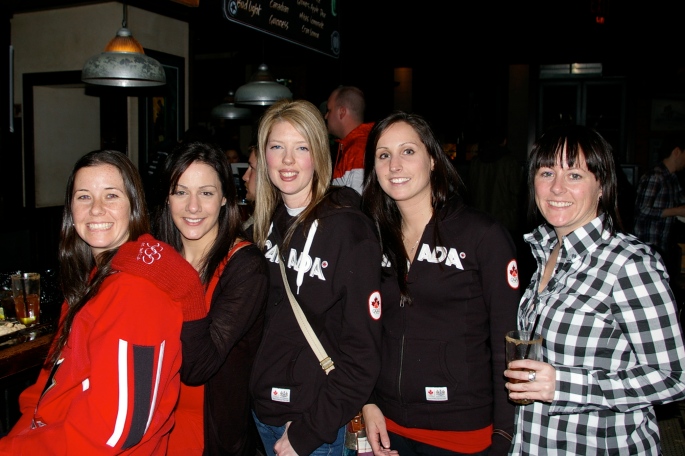 My friend Seanna invited me to go to the Russia vs. Slovakia women’s hockey game with her and some family friends on February 20th, because her friend Natalie plays on the Slovakia team and left her four tickets at will call! W00t! Lucky me.

February 21st was the day Team Canada played against the USA in men’s hockey and lost! My friends and I watched it at Shark Club, which was a crazy, crazy scene. We didn’t lose hope though, and even made friends with some Americans.

I had a few quiet nights after this, and I even skipped watching the semi-final men’s hockey match vs. Slovakia (because I knew they would win anyway), and went to my second medal ceremony on February 26th to see Great Big Sea perform. And I’m so glad I did, because they were fantastic. I think there a lot of Newfoundlanders in the audience because everyone was singing, clapping, and stomping along to the music. For some reason, this was a really happy moment for me. Maybe I should have been born on the East Coast…. Nah. 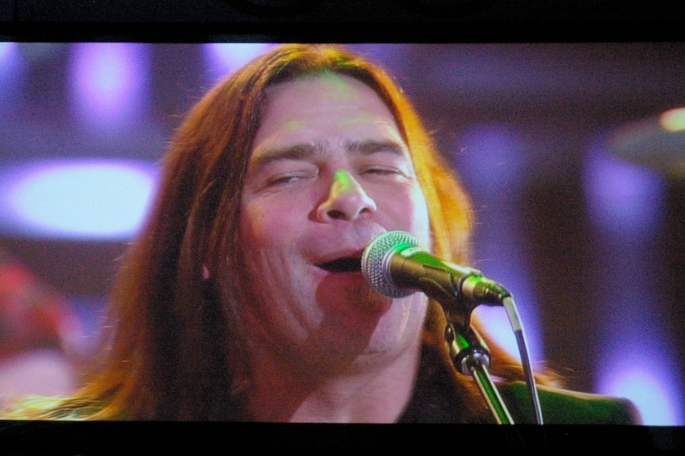 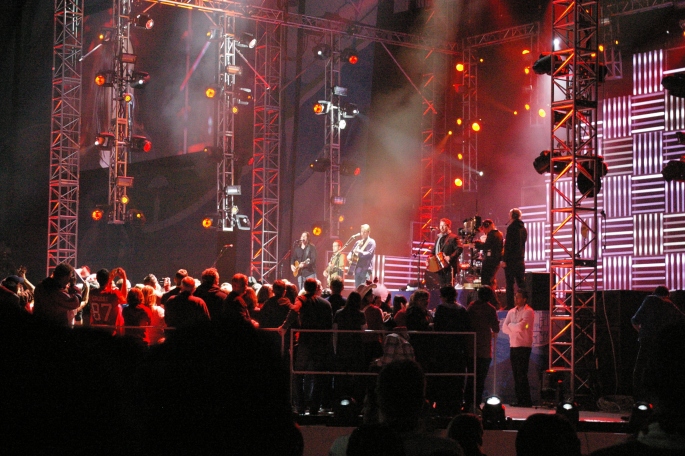 After the ceremony, my friend Erica and I snuck into Library Square to share in the celebration of Team Canada making it to the gold medal match for men’s hockey. There were a few Swedish girls who had the same plan, and they were nice enough to let me take their photo.

Finally, February 28th was the gold medal men’s hockey game of Canada vs. USA, and the day of the closing ceremony. My friends and I were up bright and early to watch the game at Earls Yaletown. We drank mimosas and had a delicious buffet breakfast, then sat back to watch the best hockey game ever.

I have more Olympics photos that I still have to update here.

It was a great couple of weeks Canada (& the world!), and I’m never going to forget it. Thank you Vancouver for throwing such great party.

70?!? I honestly can’t believe it.
8 months with little Wy Wy (as Austin so affectionately calls him). 🥰 It seems like we went from summer to fall in a heartbeat—one minute we were at the beach or pool, now we are bundling up to watch the school buses go by at the end of the road.
Such a perfect little weekend in Vancouver. ♥️ We fit in so many visits with family and friends, we power-shopped with these two little boys, visited Science World, strolled Granville Island, played on playgrounds, rode the aquabus, and more. Our time was short, but it felt like we made the most of every minute. Can’t wait to do it all again soon!